These two recipes are from the “Some Like it Hot” story(?…column?…feature?) in the October 2003 issue.  They are all supposed to be based on a classic Mexican food.  I generally like the way Everyday Food does Mexican food.  Lots of avocado and healthier stuff than beef enchiladas with extra cheese.

The fish veracruzano called for red snapper, but Aldi carries two kids of fish: salmon and tilapia.  So this is tilapia.

Side story: I’ve had those napkins since I sewed them for my first apartment back in college

This was a relatively quick recipe without a ton of prep, and you’ll notice that most of the ingredients keep for a long time.  The plum tomatoes are the most perishable thing.  Other than that it’s onions, garlic, pickled jalapeños (gotta love a recipe that calls for jarred food), green olives (again, whoo and hoo), dried oregano, fish, and limes.  I like recipes that can be made at the end of the week when the more perishable things I shopped for have already gone bad or been used.

It’s a tasty recipe with lots of saltiness and tang.  If you like olives (attention, B!), then you’ll like this recipe.

On to the beef tacos.

It’s difficult to take pictures of tacos. They always look like tostadas.

This is three recipes in one: beef taco filling, guacamole, and pico de gallo.  Speaking of letting things go bad…I purchased 7 plum tomatoes for this recipe.  The pico de gallo called for 6 and the guacamole called for 1.  All but one went bad in the fridge by the time I got around to this recipe.  Oops.  But I didn’t want to hold off on making this and it was too late to go to the store.  So I made an incredibly tiny batch of guac and an equally ridiculously small batch of pico de gallo.

It’s not often you get to sixth a recipe

You know what?  This was a totally legit option.  Sometimes you don’t need a giant amount.  This was enough for two adults to garnish their tacos for one meal.  It meant we didn’t have them for leftovers, but that’s not the end of the world.

There’s another substitution involved here.  The recipe calls for 3 total jalapeños in the three recipes.  D and I just took apart the last of our garden.  This yielded one more random pepper (Anaheim?): 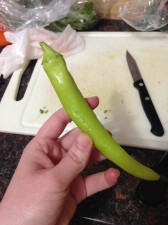 The long skinny pepper has almost zero heat, so it didn’t help much but the Poblano gave it all good flavor.

This is a fine taco meat recipe, by the way.  I like the freeze it taco filling recipe from another issue better, but this one is fine too.

And if you need more heat, may I suggest Valentina.  Ah Valentina…the magical $1.00 hot sauce. How are they making any money selling this stuff?!