D here again, handling bar-tending duties.
We’re trying out the recipe for Maple-Bourbon Cider, another of the recipes designed for holiday parties. Bourbon, maple syrup and lemon: this recipe sounded like it had potential to be very tasty.
As it turned out, the key word is “potential”…..
First off, there’s two things about the recipe as-written that are annoying to me. The first is that the measurements are a hodgepodge. Drink recipes are typically written in ounces, but if you’re dealing with a batch recipe, then it’s fine to use traditional kitchen measurements like cups. Anyway, I’ll save you the math if you’re making a batch: 6 ounces of bourbon is 3/4 of a cup.
The second annoying thing is that it is a batch recipe that doesn’t give you the breakdown for a single drink. This is a minor inconvenience.  I can divide.
So I divided this down to a 2 drink test batch so that G and I could both try it. We sampled our drinks first without the optional pinch of cayenne on top, and then we both tried it with the pinch of cayenne.
Underwhelmed. The drink was good but it mostly just tasted like apple cider with a little bit of bourbon in it. The lemon juice and maple syrup flavors were so muted that the drink ended up tasting watery and unsatisfying. But I was not giving up.
I’ve tinkered with enough cocktails in my day that I feel pretty confident in tasting a drink and being able to nail down what needs adjusting within a permutation or two. Back to the kitchen I went….
Version two came out, G sampled, and her assessment was the same as mine: much improved with a pronounced maple flavor, but the drink was too sweet. This is actually what I was going for. I reached into my secret tool kit, and the result (version 3) was so pitch-perfect that G refused to give it back.
So here’s the deal: to get the recipe right, you need to ramp up the lemon juice from the original some, but you need to ramp up the maple syrup even more. Once you make these adjustments, it will give you the right flavor proportions, but then you need to balance out the sweetness.
Hence, bitters. Angostura bitters. Total gamechanger.
Here’s what the recipe should be, for a single drink:
2 ounces apple cider
1 1/2 ounces bourbon
1/2 ounce maple syrup
1/2 ounce lemon juice
2 dashes Angostura or other aromatic bitters.
Combine all ingredients in a cocktail shaker with ice, shake. I could see this drink being fine up, but we went with what the original recipe called for and had ours in a rocks glass. Or “rock” glass – as you can see, I have those fancy ice cube trays that make a single, huge, ice cube for rocks drinks. Because I’m weird like that. 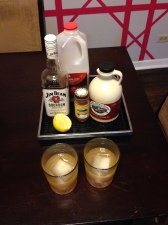 Fun fact: those are Martha Stewart Everyday glasses. I bought them at the local K-Mart when I was going off to college. I felt so grown up.
But really, this drink is all about the bitters. If you don’t have a bottle of Angostura bitters on hand, go get one. This is a perfect training-wheels drink for someone who has never experienced the subtle depth and balance of flavors that bitters can bring to a drink.
Angostura was the only bitters I tried in this drink, and it was pretty much perfect, but I’m not sure that you couldn’t use something else to balance out the sweetness of the cider and the maple syrup. I’m sure Peychaud’s would work nice, but I wouldn’t be afraid to try an orange bitters, especially a spicy one like Regan’s Orange Bitters No. 6. What’s that you say, this is a cooking blog? I’ve lost you all? Sorry. I’ll go back to doing my thing. Carry on. Come get me for the next cocktail recipe. I’ll be at the bar.