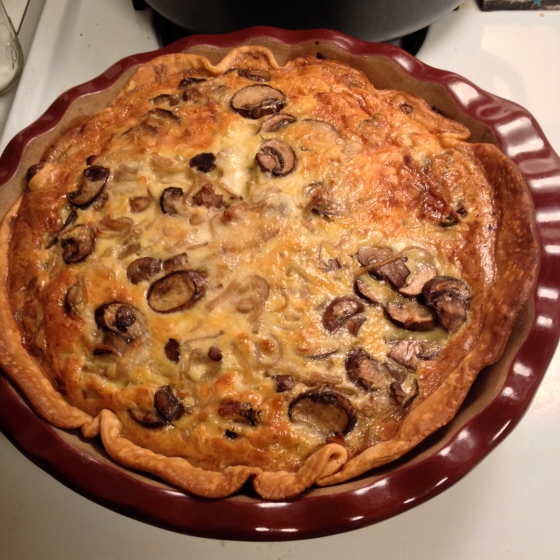 It’s hard to tell from this photo, but my filling overflowed my crust very slightly…

First of all, I’d like to take the opportunity to say that fontina is a truly tasty cheese.  I don’t know that I’ve ever really bought it before, so while I was grating it I decided to do a quick taste test.  And then another.  And another.  It took a lot longer to grate the necessary amount because I pretty much ate half of what I was grating. It’s good people.  Get some.

Secondly, this quiche is packed with goodness.  It was pretty much impossible to get any bite of just egg without some mushroom or shallot.  It was really satisfying.  It was also pretty rich.  You use 3/4 cup heavy cream so that’s a lot of decadence to a meatless dish.

I really enjoyed it.  Although I wish I had made it when I had company.  Because it was so dense with mushrooms and shallots it was really filling.  I could only eat one piece in a sitting and the same for the bear.  So that was 4 meals of quiche… which is a little much.

I served it with a small side salad of leafy greens and a lemon vinaigrette to cut the richness slightly.

Make this, but make it for guests.