From the microwave. No kidding!

Ok, if I’m not mistaken, every issue of Everyday Food had a “Zap It” recipe.  It’s a microwave cooking recipe.  I do believe that D and I only made one or two.  Huge mistake.  These recipes are so easy, so quick, and so clever.  I think I always figured that nothing good could come from the microwave or maybe I thought that it would be watery or weirdly rubbery.  I’ve had very, very limited success cooking eggs in the microwave without them exploding all over.  Perhaps I was picturing myself cleaning up exploded chorizo bits.  That is a nightmare scenario.  You’ve got to give me that.  Whatever I was thinking, I was wrong.

So let’s get into this tasty treat.  Rice and other stuff cooked in the microwave.  Very straightforward.  It’s so tasty.  I love shrimp and this was just right.

I do have to talk about the chorizo for just a bit.  The recipe calls for hard chorizo.  I shop at a grocery store with way more Mexican food than the average grocery store.  The meat is labeled in English and Spanish.  There’s a whole wall of dried peppers I’ve never seen before.  They didn’t have hard chorizo.  So you know I wasn’t going to try another place, if this one didn’t have it.  Maybe hard chorizo is more of a Spanish thing.  What they did have was something like five different kinds of the normal, soft chorizo.  The house-made chorizo at this place is nothing to play with.  I love spicy food and that stuff is too much for me.  I thought this recipe would do well with a nice, mild spice.  Plus, I had some fantasy that I would let the baby eat it (D and I wolfed it down).  So I went with a brand that said it was without spice at all.  They were lying.  It was less spicy.  As for cooking it, the recipe says to slice it on a diagonal.  Well, you don’t really do that with the soft stuff.  I just plopped it out of the casing in even sized dollops and was careful not to break it up too much when I stirred it in.  It wound up breaking up during the cooking process and spreading all through the pilaf.  That’s why my pilaf is orange and the one in the magazine is white.  Aside from aesthetics, it doesn’t matter.  The microwaved chorizo was a touch gritty, but it wasn’t anything I couldn’t ignore for the sake of an otherwise delicious recipe.

One side story:  When I asked the guys at the meat counter for hard chorizo, they said they didn’t have it and pointed out the other stuff.  I actually asked them these idiotic words, “What’s the difference?”  The one guy just kinda chuckled and said, “I dunno.  The hard stuff is like…hard.”  Point taken.

END_OF_DOCUMENT_TOKEN_TO_BE_REPLACED

20 minute meal with a side of heartburn

This is a supposed one hour prep time recipe that can be made in about 20 minutes with the help of the microwave.  Yes, you can make spaghetti squash in the microwave.  I found some instructions online that had you cut the thing in half before you microwave it.  That seemed to defeat the purpose.  So this is what you do: Take the whole spaghetti squash and stab it with a big knife in many many places evenly spaced (you can’t play serial killer and really hack at it because it’ll roll…), place it in the microwave and heat for for 16 minutes (check it at 10, 12, and 14 minutes).  It will be done when you can stab it very easily with a paring knife.  Take it out of the microwave and cut it in half lengthwise.  You’ll need mitts.  The squash is so much easier to cut when it’s cooked than it is when it’s raw.  Scrape out the seeds and discard.  Do the spaghetti squash thing with a fork to get your strands.  My strands weren’t great, but I’m no good at that.  Done!  It’s not as tasty as roasted squash, but you can barely tell the difference.  This technique makes it so squash on a weekday is actually feasible.  Ok, it did explode a little even though I stabbed holes, but it wasn’t a very big mess.  I lost maybe an 1/8 of a cup of goo and seeds.  Combine the squash with 2 T olive oil, season with salt and pepper.

The onions were delicious, but strong.  You take a red onion, slice it very thinly and marinate it with the juice and zest of 3 limes for at least 15 minutes.  This may actually be a job for that most dangerous utensil, the mandoline.  The onions kind of upset my stomach eating that many that raw.  The leftovers softened and mellowed quite a bit, luckily.  I ate them on a leftover turkey sandwich. 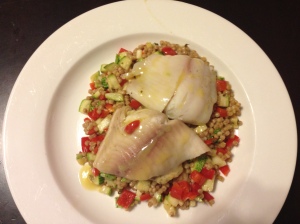 This recipe explains a lot about why I love(d) Everyday Food.  The issue B and I chose is one of the issues that went with my husband, D, during our brief academic separation.  Let me back up.  I went back to school in the fall of 2009 to get a master’s degree.  D stayed in Chicago while I went downstate because we thought it would only be a year and why uproot two lives.  So we had to divide up our stuff.  Lots of it went in my parents’ basement, lots into his parents’ basement, then the truly essential things were split between my new place and his new place.  Which brings me to Everyday Food.  Our collection of the magazine was split between us so that neither one of us would have to be without it.  I’ve been a subscriber since my mom transferred her subscription to me the fall that I started law school.  It was the fall right after I got married and the fall when I first moved to Chicago with that husband and got our cats.  This magazine is as old as my adulthood.  It taught me how to cook something besides macaroni and cheese, meatloaf, and 2-mustard chicken (a delectable dish involving…wait for it…two mustards).  So it’s important, ok?!?!

Because this recipe is from an issue that was in D’s custody during that year, he is the one with all of the experience cooking it.  In fact, he cooked it again this time.  I asked him for his thoughts about the recipe as someone who has made it so many times.  I asked him why he made it so often back in his semi-bachelor days.  He told me that it was a good choice because it is quick (that’s true, this dish really only takes maybe 15-20 minutes.  Not cookbook 15-20 minutes.  Real 15-20 minutes), and it gives you a lot of chunks of hands-off cooking time when you are free to unload the dishwasher, set the coffee for the next day, and clean up after yourself.  Plus, it is delicious.  He’s definitely right about that one.  It has a real Mediterranean flavor to it with the selection of vegetables, the couscous, and the oregano.  That makes it wonderfully light, but flavorful.  It is also nicely moist.  One does not think of things cooked in the microwave as being particularly moist, but this fish was perfect.  He also noted that this recipe uses pantry staples (dried oregano, olive oil, couscous) and things that store well for a long time (bell peppers, zucchini, and, if frozen, fish).  That makes it a good one for a semi-bachelor who doesn’t always have time to make it to the grocery store on a regular basis.

Another reason why D likes this recipe so much, he said, is because it does well with substitutions.  You’ll note that the recipe calls for flounder.  D always makes it with tilapia.  Why?  Because that’s what they sell in the big bags at Aldi.  You can also swap in other steaming-friendly vegetables without losing much.  I can imagine green beans in this dish.  This time around, D also substituted whole wheat Israeli couscous for the usual couscous.  This was completely delicious.  This did require one change to the cooking time.  You need to steam the veggie and couscous mixture for another minute if you’re using Israeli couscous.  That’s it!

A family classic worthy of becoming a staple long after we’ve reunited.