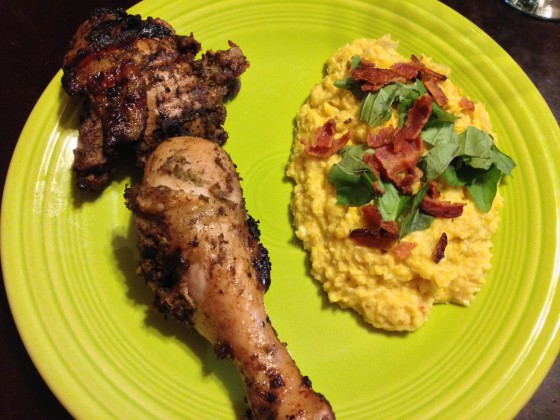 Don’t worry, chicken. This isn’t about you. You’re good.

Let’s start with the totally uncontroversial part of this delicious Sunday meal: the chicken.  This chicken recipe is easy and delicious.  The ingredients are fully bizarre.  If you can name me any other food besides jerk chicken that has you combining hot peppers with allspice, please do.  This was super hot.  D told me that the vapor of marinade hitting heat on the grill was giving him coughing fits.  I believe it.  I had one fingerful of the marinade right after it was done and my eyes were watering.  Keep in mind, please, that this was all with a jalapeno pepper because we couldn’t find a habanero or scotch bonnet pepper at the store.  I can’t imagine how much hotter this could get.  The chicken was awesome and that is that.

The corn pudding was also good, but therein hangs a tale, as they say.  The directions call for you to grate 8 ears of corn.  I really had no choice but to use a box grater for this.  I got one ear in to this process and was pretty exhausted.  After two ears, my arm was tired and the kitchen looked like a corn cob exploded on it (which it kind of did).  After three ears I was getting desperate and losing hope.  D suggested that I cut the corn off the cob and run it through the food processor.  Fine.  Sold.  He could have suggested putting whole ears in the blender.  I was ready to try anything. 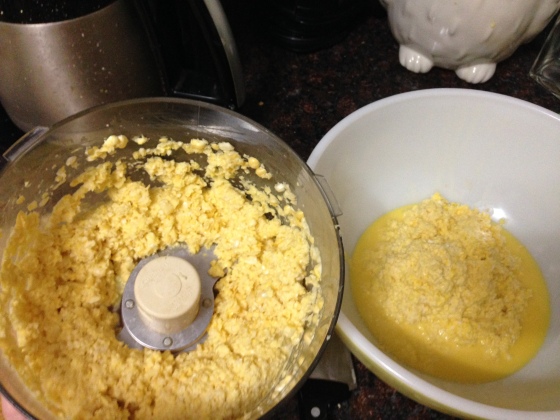 Please also note that the coffee maker, in D’s words, looks like a crime scene.

You can see that the one on the right, the grated corn, is considerably juicer than the one on the left.  To which I say “Who cares?”  Yes, this might have been a little bit more pudding-like, but I have the use of my arm.  So that’s that.  Even with that modified process, this was still terribly tedious.

Was it all worth it?  Depends who you ask.  I thought it tasted like high brow creamed corn.  To me, in a world where canned cream corn exists and, more importantly, where corn casserole exists, this cannot be justified.  Oh yeah, you add bacon and some basil to it.  Still not enough to justify the hassle.  D also thought it tasted like high brow creamed corn, and he thought that was good enough to make it worth the trouble.  Who went through the trouble?  Yeah, good point there…Grumble, grumble…  Also, D doesn’t like corn casserole.  For the uninitiated, corn casserole is a mix of a can of corn, a can of creamed corn, Jiffy cornbread mix and some proprietary ingredients to make it hold together which are then baked in the oven.  My brother’s girlfriend tops hers with cheese.  It’s delicious.  D is wrong.  If you too think that two cans and a box do not a side dish make, then go ahead and grate some corn until your arm hurts.  I, on the other hand, won’t be fooled again. 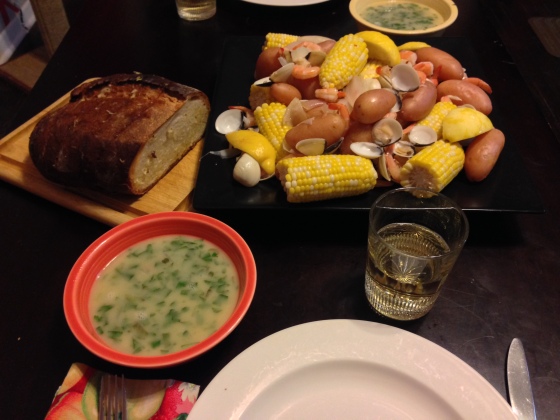 D and I are big fans of another alternative clam bake recipe from Everyday Food.  That one you do on the grill.  I had never done one of the stove top versions, but I’ve always been intrigued and maybe just a little scared.  Why?  Well, I don’t have one of those enormous New England lobster boiling, enamel coated, monstrosity pots that these recipes seem to call for.  I’ve got the biggest stock pot in the Cusinart set of stainless steel pots and pans that we got for our wedding 10 years ago.  So I didn’t want to run into a situation where there isn’t enough room for the shrimp and clams and this becomes a potato and corn bake.  I’ve also been reticent because we here in the middle of the country don’t so much have access to clams.  I surely didn’t want to buy canned clams (ew!!!!!), and I wasn’t sure if I could find fresh ones at any of my usual grocery stores.  This was not the weekend for a special trip to a fancy grocery store.

My fears were, luckily, unfounded.  The stock pot was a fine size.  And the frozen clams that D found at our normal grocery store (No, not Aldi) were just fine.  You were supposed to cook them from frozen, which is great because I didn’t have to thaw clams in the fridge (ew again!!!), but it did cause a problem for the shrimp.  The clams are the second to last thing to go in.  The shrimp are last.  The recipe has you add the shrimp, turn off the heat, then open the lid back up in three minutes to reveal perfectly cooked shrimp.  I opened the lid after maybe six minutes (distracted) and found some 1/8 cooked shrimp.  I put them back on the heat and gave them a few minutes to finish cooking.  They tasted great.  Here’s what I think happened: the recipe assumes that you have fresh clams and I used frozen ones.  When I cooked the frozen clams, I brought the clams up to the right temperature, but in doing so managed to bring the temperature of the entire pot way down.  So when I added those shrimp to what should have been a warm and steamy environment, it was probably only lukewarm and moderately steamy.  Hence, undercooked shrimp (one more time: ew!!!!).  So if you’re cooking with anything but fresh clams, keep the pot on the heat for the shrimp step.

Oh, the cheesy chive bread?  It was ok.  I made it garlic bread instead because I couldn’t find chives.  With the corn and the potatoes in the clambake, the bread wasn’t really necessary.  It was kind of nice for sopping.  I will say that buying a loaf a shade less than crusty is probably the way to go.  Hacking through that giant, hard loaf to make the cuts in the loaf was grueling.  All that fuss for some garlic bread?  C’mon.

B also tells me that these clambakes ordinarily have sausage.  How this midwestern girl missed out on an opportunity to eat sausage is kind of mind-boggling.  As B noted, what we lack in clams, we make up for in sausage.  That sounded bad.  Never mind. 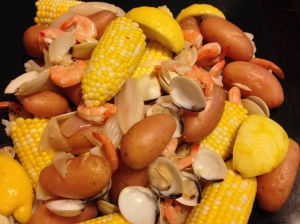